There are a number of entry points to create a codespace.

Your codespace can be ephemeral if you need to test something or you can return to the same codespace to work on long-running feature work. 詳しい情報については、「codespace を作成する」を参照してください。

Once you've selected the option to create a new codespace, some steps happen in the background before the codespace is available to you.

Step 1: VM and storage are assigned to your codespace

When you create a codespace, a shallow clone of your repository is made on a Linux virtual machine that is both dedicated and private to you. Having a dedicated VM ensures that you have the entire set of compute resources from that machine available to you. If necessary, this also allows you to have full root access to your container.

Codespaces uses a container as the development environment. This container is created based on the configurations that you can define in a devcontainer.json file and/or Dockerfile in your repository. If you don't configure a container, Codespaces uses a default image, which has many languages and runtimes available. For information on what the default image contains, see the vscode-dev-containers repository.

Note: If you want to use Git hooks in your codespace and apply anything in the git template directory to your codespace, then you must set up hooks during step 4 after the container is created.

Since your repository is cloned onto the host VM before the container is created, anything in the git template directory will not apply in your codespace unless you set up hooks in your devcontainer.json configuration file using the postCreateCommand in step 4. For more information, see "Step 4: Post-creation setup."

Step 3: Connecting to the codespace

When your container has been created and any other initialization has run, you'll be connected to your codespace. You can connect to it through the web or via Visual Studio Code, or both, if needed.

Once you are connected to your codespace, your automated setup may continue to build based on the configuration you specified in your devcontainer.json file. You may see postCreateCommand and postAttachCommand run.

If you have a public dotfiles repository for Codespaces, you can enable it for use with new codespaces. When enabled, your dotfiles will be cloned to the container and the install script will be invoked. 詳しい情報については、「アカウントの Codespaces をパーソナライズする」を参照してください。

Finally, the entire history of the repository is copied down with a full clone.

During post-creation setup you'll still be able to use the integrated terminal and make edits to your files, but take care to avoid any race conditions between your work and the commands that are running.

Saving files in your codespace

Note: Changes in a codespace in Visual Studio Code are not saved automatically, unless you have enabled Auto Save.

Closing or stopping your codespace

When you close or stop your codespace, all uncommitted changes are preserved until you connect to the codespace again.

ポート転送を使用すると、Codespaces 内で実行されている TCP ポートにアクセスできます。 For example, if you're running a web application on port 4000 within your codespace, you can automatically forward that port to make the application accessible from your browser.

Port forwarding determines which ports are made accessible to you from the remote machine. Even if you do not forward a port, that port is still accessible to other processes running inside the codespace itself. 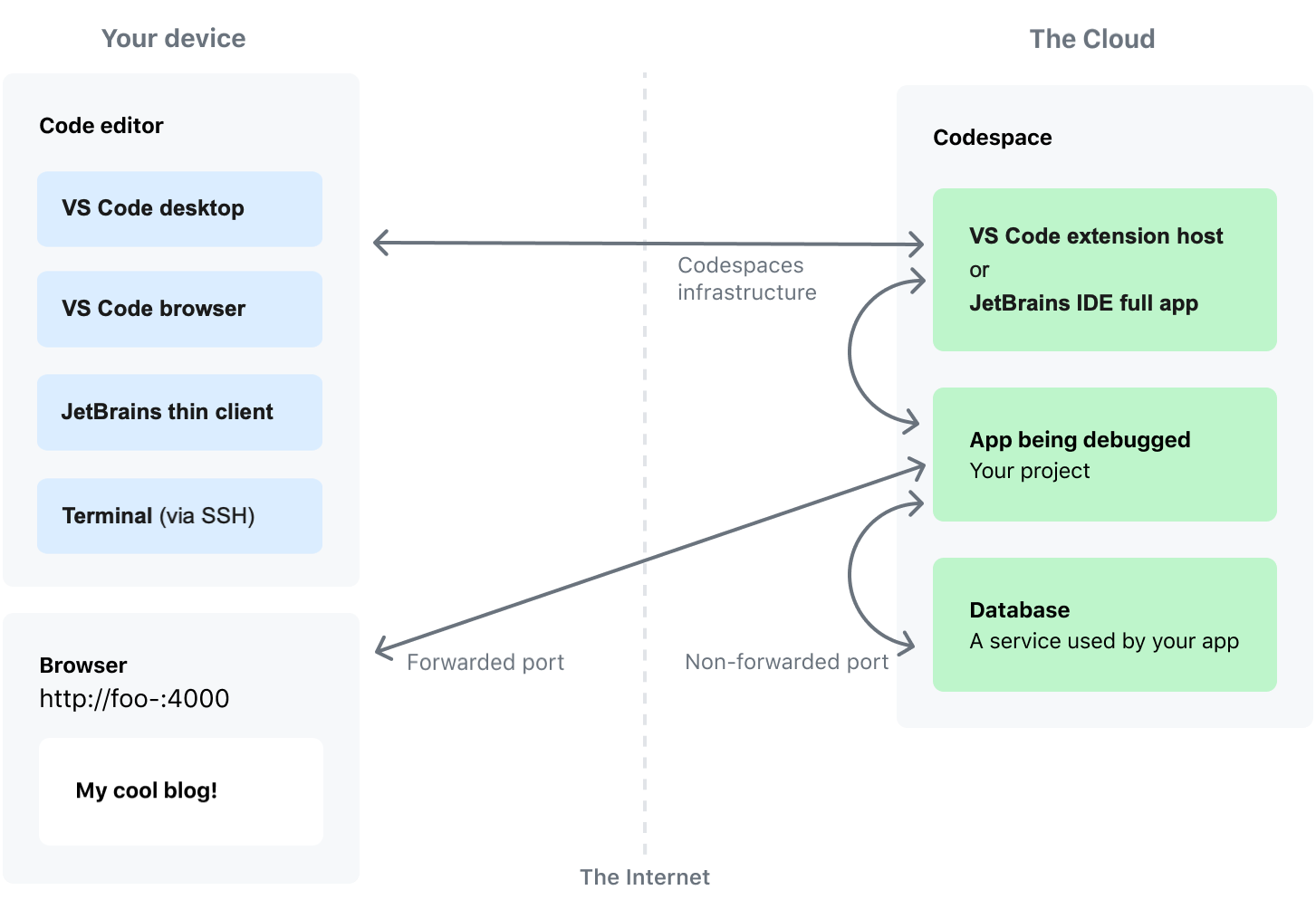 When an application running inside Codespaces outputs a port to the console, Codespaces detects the localhost URL pattern and automatically forwards the port. You can click on the URL in the terminal or in the toast message to open the port in a browser. By default, Codespaces forwards the port using HTTP. For more information on port forwarding, see "Forwarding ports in your codespace."

While ports can be forwarded automatically, they are not publicly accessible to the internet. By default, all ports are private, but you can manually make a port available to your organization or public, and then share access through a URL. For more information, see "Sharing a port."

Running your application when you first land in your codespace can make for a fast inner dev loop. As you edit, your changes are automatically saved and available on your forwarded port. To view changes, go back to the running application tab in your browser and refresh it.

Committing and pushing your changes

You can create a codespace from any branch, commit, or pull request in your project, or you can switch to a new or existing branch from within your active codespace. Because Codespaces is designed to be ephemeral, you can use it as an isolated environment to experiment, check a teammate's pull request, or fix merge conflicts. リポジトリごと、さらにはブランチごとに1つ以上のcodespaceを作成できます。 However, each user account has a limit of 10 codespaces. この制限に達した場合に新しいcodespaceを作成したいなら、まずcodespaceを削除しなければなりません。

Note: Commits from your codespace will be attributed to the name and public email configured at https://github.com/settings/profile. A token scoped to the repository, included in the environment as GITHUB_TOKEN, and your GitHub credentials will be used to authenticate.

Personalizing your codespace with extensions

If you already use Visual Studio Code, you can use Settings Sync to automatically sync extensions, settings, themes, and keyboard shortcuts between your local instance and any Codespaces you create.