Build an app that reliably interacts with the GitHub API and provides the best experience for your users.

Interested in integrating with the GitHub platform? You're in good company. This guide will help you build an app that provides the best experience for your users and ensure that it's reliably interacting with the API.

It's very important that you secure the payloads sent from GitHub. Although no personal information (like passwords) is ever transmitted in a payload, leaking any information is not good. Some information that might be sensitive include committer email address or the names of private repositories.

There are several steps you can take to secure receipt of payloads delivered by GitHub:

GitHub expects that integrations respond within 30 seconds of receiving the webhook payload. If your service takes longer than that to complete, then GitHub terminates the connection and the payload is lost.

Since it's impossible to predict how fast your service will complete, you should do all of "the real work" in a background job. Resque (for Ruby), RQ (for Python), or RabbitMQ (for Java) are examples of libraries that can handle queuing and processing of background jobs.

Note that even with a background job running, GitHub still expects your server to respond within thirty seconds. Your server needs to acknowledge that it received the payload by sending some sort of response. It's critical that your service performs any validations on a payload as soon as possible, so that you can accurately report whether your server will continue with the request or not.

Use appropriate HTTP status codes when responding to GitHub

Every webhook has its own "Recent Deliveries" section, which lists whether a deployment was successful or not.

You should make use of proper HTTP status codes in order to inform users. You can use codes like 201 or 202 to acknowledge receipt of payload that won't be processed (for example, a payload delivered by a branch that's not the default). Reserve the 500 error code for catastrophic failures.

Provide as much information as possible to the user

Users can dig into the server responses you send back to GitHub. Ensure that your messages are clear and informative. 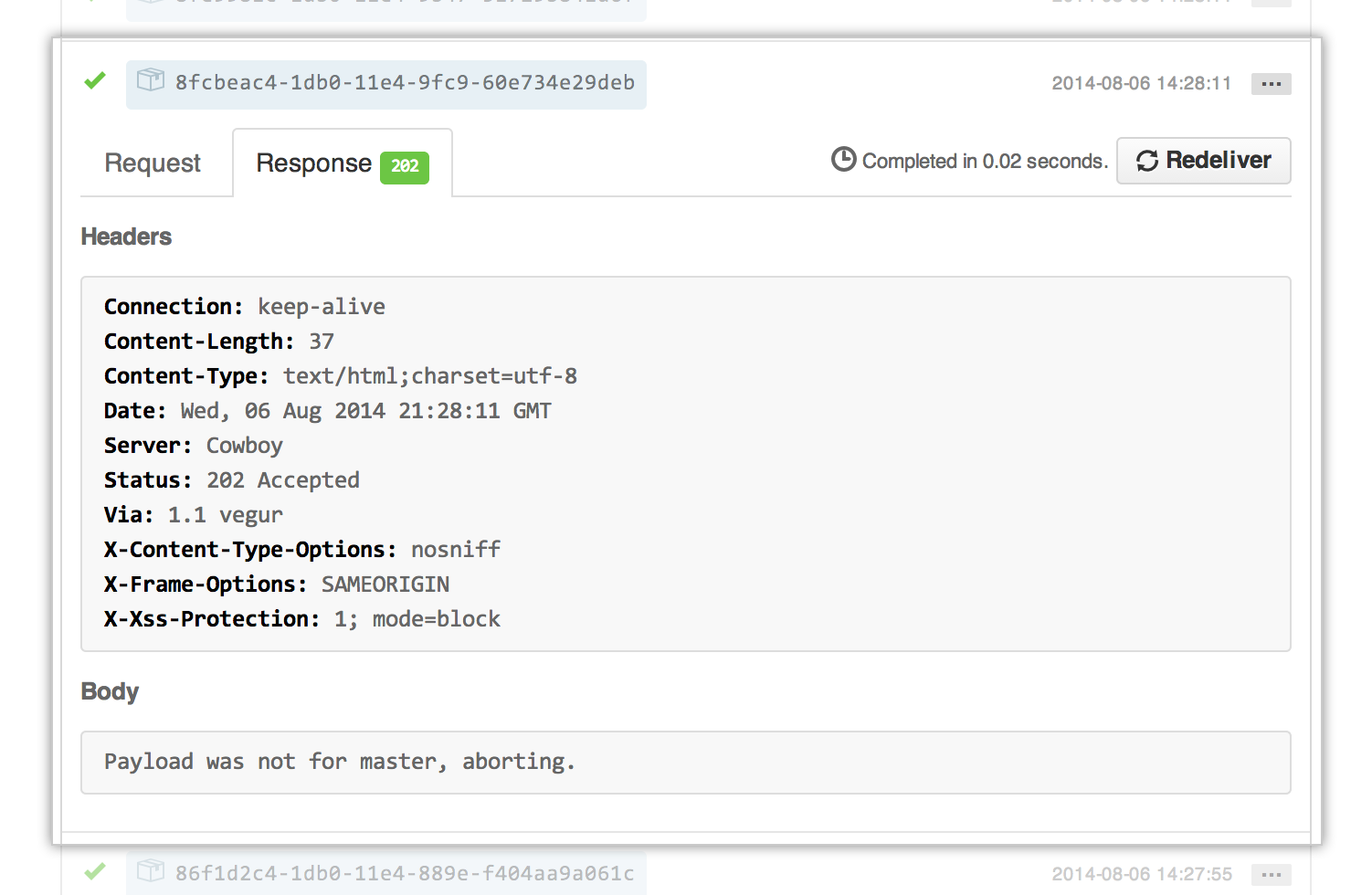 GitHub is explicit in telling you when a resource has moved by providing a redirect status code. You should follow these redirections. Every redirect response sets the Location header with the new URI to go to. If you receive a redirect, it's best to update your code to follow the new URI, in case you're requesting a deprecated path that we might remove.

We've provided a list of HTTP status codes to watch out for when designing your app to follow redirects.

Often, API responses contain data in the form of URLs. For example, when requesting a repository, we'll send a key called clone_url with a URL you can use to clone the repository.

For the stability of your app, you shouldn't try to parse this data or try to guess and construct the format of future URLs. Your app is liable to break if we decide to change the URL.

For example, when working with paginated results, it's often tempting to construct URLs that append ?page=<number> to the end. Avoid that temptation. Our guide on pagination offers some safe tips on dependably following paginated results.

Check the event type and action before processing the event

There are multiple webhook event types, and each event can have multiple actions. As GitHub's feature set grows, we will occasionally add new event types or add new actions to existing event types. Ensure that your application explicitly checks the type and action of an event before doing any webhook processing. The X-GitHub-Event request header can be used to know which event has been received so that processing can be handled appropriately. Similarly, the payload has a top-level action key that can be used to know which action was taken on the relevant object.

For example, if you have configured a GitHub webhook to "Send me everything", your application will begin receiving new event types and actions as they are added. It is therefore not recommended to use any sort of catch-all else clause. Take the following code example:

In this code example, the process_repository and process_issues methods will be correctly called if a repository or issues event was received. However, any other event type would result in process_pull_requests being called. As new event types are added, this would result in incorrect behavior and new event types would be processed in the same way that a pull_request event would be processed.

Instead, we suggest explicitly checking event types and acting accordingly. In the following code example, we explicitly check for a pull_request event and the else clause simply logs that we've received a new event type:

As with adding event types, we may add new actions to existing events. It is therefore again not recommended to use any sort of catch-all else clause when checking an event's action. Instead, we suggest explicitly checking event actions as we did with the event type. An example of this looks very similar to what we suggested for event types above:

In this example the closed action is checked first before calling the process_closed method. Any unidentified actions are logged for future reference.

Although your code would never introduce a bug, you may find that you've encountered successive errors when trying to access the API.

Rather than ignore repeated 4xx and 5xx status codes, you should ensure that you're correctly interacting with the API. For example, if an endpoint requests a string and you're passing it a numeric value, you're going to receive a 5xx validation error, and your call won't succeed. Similarly, attempting to access an unauthorized or nonexistent endpoint will result in a 4xx error.

Intentionally ignoring repeated validation errors may result in the suspension of your app for abuse.