When working with other people's repositories, there are a few basic Git commands to remember:

These commands are very useful when interacting with a remote repository. clone and fetch download remote code from a repository's remote URL to your local computer, merge is used to merge different people's work together with yours, and pull is a combination of fetch and merge.

We'll go in-depth on these commands below.

To grab a complete copy of another user's repository, use git clone like this:

You can choose from several different URLs when cloning a repository. While logged in to GitHub, these URLs are available below the repository details: 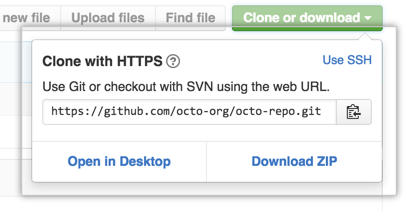 When you run git clone, the following actions occur:

Use git fetch to retrieve new work done by other people. Fetching from a repository grabs all the new remote-tracking branches and tags without merging those changes into your own branches.

If you already have a local repository with a remote URL set up for the desired project, you can grab all the new information by using git fetch *remotename* in the terminal:

Otherwise, you can always add a new remote and then fetch.

Merging combines your local changes with changes made by others.

Typically, you'd merge a remote-tracking branch (i.e., a branch fetched from a remote repository) with your local branch:

git pull is a convenient shortcut for completing both git fetch and git mergein the same command:

Because pull performs a merge on the retrieved changes, you should ensure that your local work is committed before running the pull command. If you run into a merge conflict you cannot resolve, or if you decide to quit the merge, you can use git merge --abort to take the branch back to where it was in before you pulled.